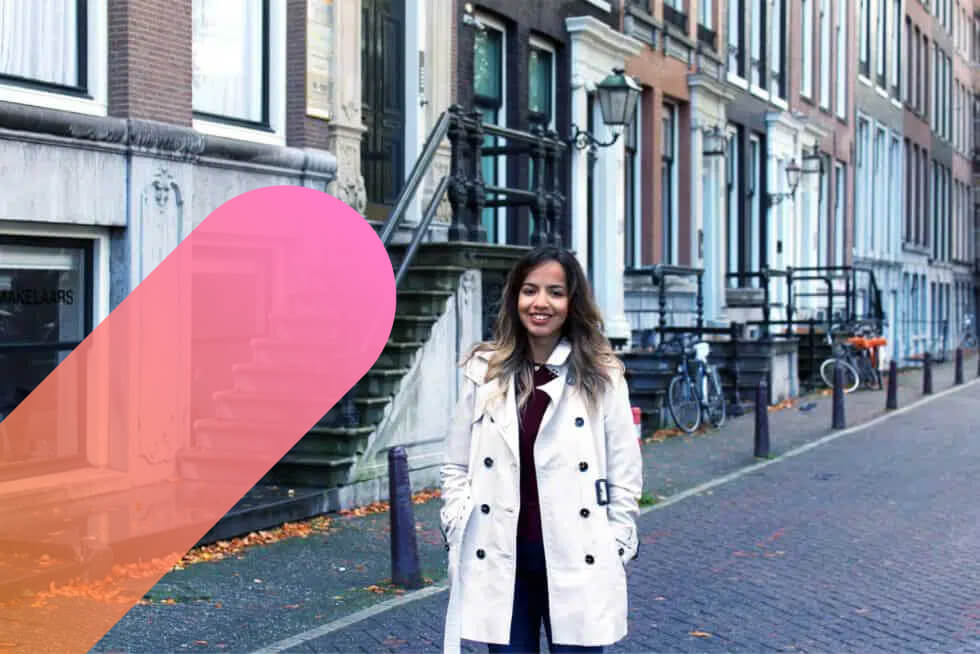 Fatima has come a long way despite her young age. Back in her native Morocco, her education in computer science opened up a lot of opportunities for her. She quickly found success working as a frontend developer at the multinational company Capgemini. But Fatima didn’t want to take an easy path in life and just stay in her comfort zone. Instead, she wanted to taste and experience more of what life had to offer, and this free-spirited attitude led her to Factris.

Among the many opportunities available to her, it was Factris that Fatima chose to be a part of as a frontend developer. When asked about moving all the way up to Amsterdam from Morocco to join Factris, she recalls excitedly, “Factris seemed fresh and new, and I wanted to try something totally different! I like experiencing new, exciting things instead of staying in the same routine for a long time,” admits Fatima. “I had many opportunities throughout Europe, especially in Paris. But I felt that because it’s the same work culture as what I already knew, maybe I should try something else. So I made the decision: I’m going to Amsterdam to join Factris!” she exclaims. Adventure is close to her heart, which she acknowledges, “Lots of people say they would never do something so daring, but I love it!”

However, just because she is adventurous doesn’t mean she’s fearless. For example, in the days before her start at Factris, she was nervous about what it might be like. She recalls, “In the beginning, I didn’t know what to expect. I worried ‘What are people going to be like? How will they treat me?’ But everybody was really nice! Seriously, they were all so helpful, regularly asking if I needed anything. I really appreciate the work environment at Factris.”

Factris values cultural diversity as a company, which also played a major part in her feeling accepted. She explains, “Because there are so many cultures and people from different places, I didn’t feel like a stranger or an outsider. Maybe if everyone was only Dutch, then I would feel left out. But everyone on my team is from another country, so it’s not like that at all. We’re all different – and I like that!”

“We’re doing our best to make it better and better”

Fatima and her team have already achieved marvellous things at Factris. For example, they’ve created and developed the FAB platform, which is central to Factris’ success. However, her success hasn’t gone to her head. For example, when asked about her team’s tremendous accomplishments with the platform, she modestly states, “We’re going to continue to work on it, and we’re doing our best to make it better and better. I’m a problem solver by nature, and I love taking something good and making it even better.”

The success she’s experienced certainly didn’t come easy. But as she recounts the many problems her IT team faced, her hard-working attitude becomes evident. She recalls, “Working on the platform was a rollercoaster. There were problems, there were bugs! Things weren’t working. I felt like ‘What’s happening? We don’t understand!’… And then we found the solution! And it was all worth it.” she concludes. Her hard work has undoubtedly paid off, both for her and for Factris.

Factris continues to grow, thanks to Fatima’s hard work and ingenuity. But Fatima has also grown thanks to Factris. She relates, “My whole life has changed since coming to Amsterdam to be a part of Factris. I’ve learned a lot of new things as a person, which is important to me. After all, I don’t want a life focused on just work. I hope to continue to grow and find new ways to see life and to experience even more. For instance, I love my new hobbies, like yoga and dancing. And I hope to keep seeing more of Europe, and eventually the whole world.” A healthy work-life balance keeps her joyful and energetic as Fatima continues to improve Factris.

But despite the many new developments for Fatima, she isn’t focused only on change. She’s also taking time to enjoy what’s happening in her life right now. “I really don’t know what the future holds or where I’ll be in ten years. Maybe I will have my own company. Maybe I’ll have an excellent idea, and I can build my own application platform – that would be my dream. But for now, I’m really happy being here.”

Fatima has chosen a life that’s far from ordinary by working for Factris. And her relentless work ethic has already led her to success, both with the company and as a person. She comments, “If you work hard for something and you really want it, then you get it. Sure, there’s something called luck too – but to me, hard work is the key for any successful person. I still have a life, and I live like any normal person. But when I want something, I set a goal and I do it because I believe in hard work.”