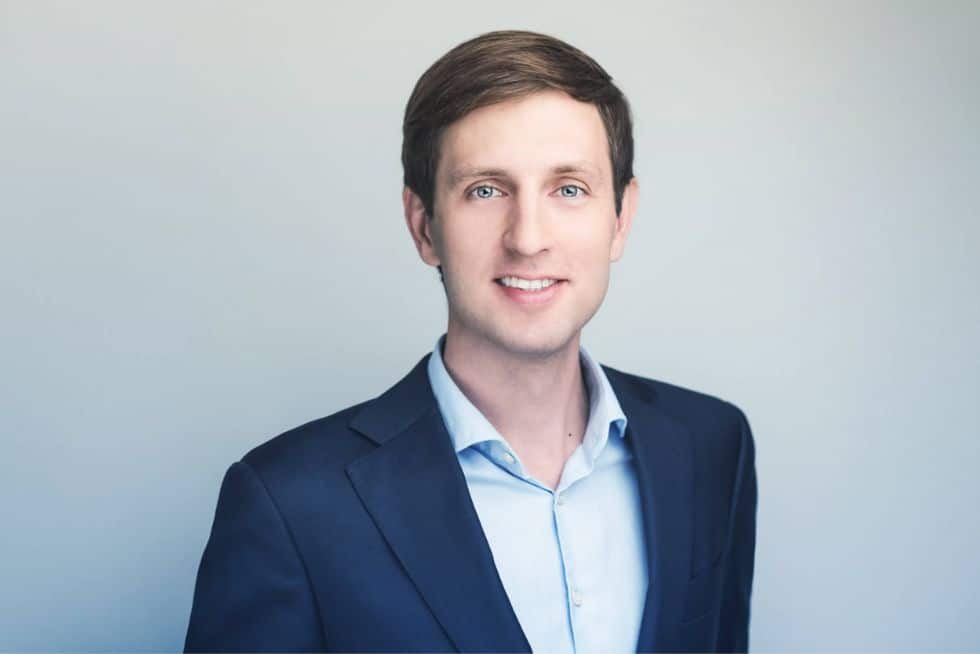 Justas can safely be called a pioneer in non-banking invoice financing in Lithuania. Seeing the lack of this service in 2015, he had such faith in his business idea that in spite of the discouragement of sceptics (and even loved ones!) that it wasn’t worth it, he “rolled up his sleeves” and dived right in. The result? Clear as day. From a one-person company to one that is growing each year dramatically, and now with the international factoring company Factris and its team of 50 motivated people behind it. True, the road was not as simple as it may seem.

“Before the company was founded, I worked in investment banking for four years. I had to contribute to the financial activities of various companies – business valuations, raising capital, buying and selling companies, and other issues. I learned a lot and met many business people – some of them have become the shareholders of the future factoring company Debifo. We felt a niche – we saw that there was a need in the market to finance invoices. At that time, nobody was doing that in Lithuania, except banks. I started actively exploring what is happening in this market globally and how,” says Mr Šaltinis, recalling how his business idea began.

After analysing the market, he ran into a major obstacle. “We calculated that the provision of this service is very expensive. Even so, I still believed the idea. I remember asking people around and business people I knew if they saw a need. In short, the majority said “no”. But if there is such a need and opportunity in the world, it should be in Lithuania as well. I truly wanted to try myself out in this new niche,” he recalls.

Justas decided to start looking for clients immediately. The beginning was hard – he had to challenge and push himself. “This initial learning stage lasted about a year. I started doing everything myself: attracting the first potential clients, doing a risk assessment, raising capital, marketing and many other issues. Little by little, people who needed this service began to emerge. Sure, building trust was not easy, but the specifics of factoring are slightly different. We are the first to trust the client. We transfer the money and hope to get it back. Gradually, everything fell into place,” says Mr. Šaltinis.

The synergy that makes it possible to strive for more

We eventually started looking for reinforcement for our team, and interest in the service and awareness of it spread rapidly. Competitors began to emerge in the market as well. “I’ve always said that there’s no need to fear competition. After all, it brings benefits. First of all, for the client, plus it forces us to progress and improve our service,” says the member of the Factris management team with certainty.

Finally, in January of this year, the Lithuanian factoring company Debifo that had been in operation this entire time merged with Factris, a company that was established in Amsterdam in 2017. “Naturally, we always have to look for ways to obtain cheaper capital and provide better service to clients. I’d say that the merger happened quite unexpectedly. One day while looking for cheaper borrowed capital, I came across Factris representatives; we talked, then met, and a couple of months later decided to merge. This is the synergy that makes it possible to strive for more. I’m always open to opportunities. Today, their capital is cheaper, so we can offer even more favourable conditions to our clients. Operating internationally is, of course, a challenge, but also a great advantage. It gives us more flexibility and opportunities,” says Mr. Šaltinis.

Now Justas is responsible for the development of Factris services as well as sales and expansion in the countries where the company operates. “We’re transferring the best practices we have accumulated over our entire period of operation to other countries. Obviously, the markets are different both in terms of their size and the competitive field, and they all have their own rules. You have to examine each one and know what is relevant there. For example, in one place speed is particularly significant, while it’s not very important to others,” says the Factris COO.

“We are too busy to stop and think about whether it was all worth doing, but I can say with certainty that it was. We have been operating for four years, but the experience is priceless! There is definitely stress – I face a new challenge every day, and I still have to learn how to work with different teams and people of different nationalities and keep employees motivated. As they say, business is like a war without bullets. You have to keep fighting and moving forward. It’s inevitable,” says Justas, sharing the specifics of his work.

“I’m a firm believer that the hard, focused work helps achieve results. If you’re responsible, you have to knuckle down and do it. It would be best if you did not walk away from your ideas – you must realise them boldly,” says Mr. Šaltinis.

Even though he has less and less free time, Justas is trying not to forget his hobby – triathlon. He is now focusing on swimming alone. “In sports, it’s the same as in business – you have to specialise,” says Justas Šaltinis.

“I also read many books so that I can rely on the experience of others. When you’re a young manager, I think you need to learn not only from your own mistakes but from the experiences of others as well. High Output Management is one of those books that I would recommend. It’s pretty old, but I was surprised at how many valuable ideas I found in it. Travelling also helps refresh your mind. My wife and I try to find time for that too,” says Justas about his free time.

This website uses cookies to improve your experience while you navigate through the website. Out of these, the cookies that are categorized as necessary are stored on your browser as they are essential for the working of basic functionalities of the website. We also use third-party cookies that help us analyze and understand how you use this website. These cookies will be stored in your browser only with your consent. You also have the option to opt-out of these cookies. But opting out of some of these cookies may affect your browsing experience.
Necessary Always Enabled

Performance cookies are used to understand and analyze the key performance indexes of the website which helps in delivering a better user experience for the visitors.

Analytical cookies are used to understand how visitors interact with the website. These cookies help provide information on metrics the number of visitors, bounce rate, traffic source, etc.

Advertisement cookies are used to provide visitors with relevant ads and marketing campaigns. These cookies track visitors across websites and collect information to provide customized ads.

Other uncategorized cookies are those that are being analyzed and have not been classified into a category as yet.

SAVE & ACCEPT
Powered by